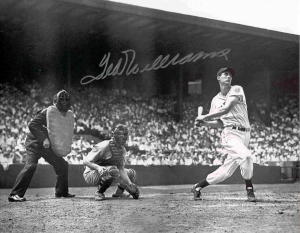 
Ted Williams was the last major leaguer to hit .400 in a season.

Ted Williams — a sports and war hero and maybe baseball's
greatest hitter — died July 5 at age 83. A hospital spokeswoman
in Crystal River, Fla. said Williams was pronounced dead of
cardiac arrest. As a youngster, Williams dreamed of being known
as the greatest hitter ever, and many believed he lived that
dream. He was the last major leaguer to hit .400, reaching the
milestone in 1941 when he batted .406, and he captured six
American League batting crowns with the Boston Red Sox.

Williams was remembered at Fenway Park as groundskeepers began
shaving his No. 9 into the left-field spot where he used play.
The American flag in center field was lowered to half-staff hours
before the Red Sox entertained the Detroit Tigers.

At the Hall of Fame in Cooperstown, N.Y., a wreath was placed
around his plaque and a flower arrangement was put around his
statue.

In recent years, Williams battled a series of strokes and
congestive heart failure and got around in a wheelchair.

Williams' place in sports history — cemented long before — was
reinforced at the 1999 All-Star Game when he rode a cart from
center field to the Fenway Park infield and received an emotional
group hug from current baseball stars.

''Wasn't it great!'' Williams said later. ''It didn't surprise me
all that much because I know how these fans are here in Boston.
They love this game as much as any players and Boston's lucky to
have the faithful Red Sox fans. They're the best.''

He had been bothered by health problems later in life, suffering
a series of strokes and congestive heart failure in recent years.
He underwent open-heart surgery in January 2001 and had a
pacemaker inserted in November 2000.

As a player, he combined power and batting average like no
others.

"He was absolutely the best hitter I ever saw," said no less of
an authority than Joe DiMaggio. And the Yankee Clipper's
sentiments were echoed by many, including fellow Hall of Famers
Bob Feller, Satchel Paige and Mickey Mantle.

''He is the premier measuring stick for all hitters,'' said Frank
Howard, who played for Williams in Washington from 1969 to 1971.

''When I was just a rookie in 1941, he took me under his wing,"
Rizzuto said. "After he hit a double one day, he called timeout
and told me, 'Kid, you've got a chance to play for the Yankees
for a long time, so bear down.' He was a credit to the game and
did so much for so many people.''

Williams' resume featured a .344 lifetime average, 521 home runs,
four home run titles, a record .483 career on-base percentage, a
slugging percentage of .634 that was topped only by Babe Ruth,
nine slugging crowns and a top-ten finish in runs per game with
.80.

Only the Babe walked more that Williams' 2,019 times, while the
Red Sox outfielder led the league in bases on balls eight times.
Williams' two Triple Crowns are matched only by Rogers Hornsby
and, if not for George Kell hitting .0000557 of a point better in
1949, he would have won a third.

Williams cracked his 521 home runs and recorded 2,654 hits
despite the loss of nearly five full seasons to military service
in World War II and Korea.

As a serviceman, his numbers were Hall of Fame.

He flew 39 combat missions in a Marine fighter in Korea and took
enemy fire three times.

Until his death, he was no more willing to succumb to advancing
age than he was to give in to a pitcher with a good fastball. He
had the ultimate eye as his walk total shows.

Williams, doctors said, could see at 20 feet what people with
normal eyesight see from 10. Armed forces ophthalmologists said
his eyesight was so keen it was a one-in-100,000 proposition.

His swing was even more of a rarity. "I'd rather swing a bat than
do anything else," he said. The eye-and-swing combination was so
unerring he could actually tell if he hit a ball on the seams or
on the fat of the ball..

It was a self-taught swing, a left-handed stroke that had the
perfection of an architectural drawing and the speed and snap of
a horsewhip. Williams refined it on San Diego back lots and used
it to win a berth with the San Diego Padres of the Pacific Coast
League. He was 17 years old and stood 6-3 and 148 pounds.

Calling him skinny would be too kind. But calling him a tough
out, even then, would be no exaggeration. Hall-of-Famer Eddie
Collins noticed. He was scouting Bobby Doerr, a future Hall of
Famer, when Williams caught his eye. It was a golden moment in
baseball history, certainly the best thing that ever happened to
the Red Sox.

Williams filled out a bit and became a fixture in left field, the
devastating hitter of legend, the focus of an extraordinary
love-hate relationship with New England fans that was reflected
in his nicknames bestowed upon him.

Williams was singled out even in an era when the press handed out
freely colorful monikers. Many players had one nickname. Williams
drew four - "The Splendid Splinter," "The Thumper," "Teddy
Ballgame" and "The Kid" And to former teammate Johnny Pesky, he
was "No. 9."

Williams moved the best and the brightest in sports and
literature to rhapsody. No one expressed the special-man,
special-times essence of Williams any more John Updike, whose New
Yorker essay on Williams' final game, "Hub Fans Bid Kid Adieu,"
has long been mandatory reading for baseball fans.

Updike, who sat in the stands that gray afternoon in September of
1960, lovingly detailed the last game, played before 10,454 at
Fenway Park, and how Williams shunned the standing ovation that
begged for one last look and a final bow.

Perhaps a home divided by divorce contributed to his sometimes
sullen disposition. His mother was a Salvation Army worker, by
all accounts a zealot. His father ran a photography studio.

Williams cared little for fans, even less for sportswriters. He
favored the clubhouse men, cab drivers, in other words, the
underclass, people a step or two removed from needing the kind of
help his mother's work provided.

Williams was not one to shy from any confrontation. The opponent
could be a pitcher, a journalist or a North Korean fighter plane.
He did not pick his spots.

Doerr once compared Williams to Gen. George S. Patton. "No
retreat, no compromise." That included his reaction to the
Boudreau shift, an infield defense popularized by then-Cleveland
manager Lou Boudreau in which only the third baseman was on the
left field side of second base.

It is a strategy that Barry Bonds and Frank Howard saw in later
years — although never to such an exaggerated degree. Williams
might have bunted .500 if he had been inclined. He wasn't. No
retreat, no compromise and it wasn't until later in his career
that he began going more to the opposite field.

Williams also showed no compromise to his 1941 bid to become the
first .400 hitter since Bill Terry in 1930. Williams approached a
final-day doubleheader with a .39955 average. That rounded off to
.400 and meant he could have sat out. Williams would have none of
it and he proceeded to burn the Philadelphia A's for six hits in
two games for a .406 finish No retreat, no compromise.

Williams' wartime service included time served with a future
astronaut, U.S. Senator and presidential aspirant John Glenn.
Williams was as cool facing life-or-death pressure as he was
facing anything a Feller fastball had to offer.

Glenn likes to tell of a mission in which Williams' jet was hit,
landed without landing gear, and Williams calmly got away from
his plane only moments before "it melted" on the landing strip.

Three years of play lost during World War II and almost two full
years in the Korean War denied Williams his chances at passing
Ruth's 714 home runs long before Hank Aaron shot by. As did many
who served from his generation, Williams had no regrets.

There were stormy times, to be sure. Mel Webb, a vindictive
writer, denied Williams a spot in his 10-man MVP ballot in 1947.
Williams batted .343 with 32 homers and 114 RBI that year, and
barely missed his second MVP because of Webb.

Williams spat contemptuously in the direction of the press box in
1956 after his 400th home run and once flung his bat that hit
then-Red Sox executive Joe Cronin's housekeeper.

Nine years after his 1960 retirement, Williams returned to the
game as manager of the Washington Senators. He stayed on for
three seasons in Washington and the club's first year as the
Texas Rangers. He won the '69 Manager-of-the-Year award, but that
was not his calling. He irritated plenty of people, but it is
because he irritated pitchers most — he often called them "the
dumbest people in the world" — that he was and is a baseball
icon. His death will never change that.

Between baseball, Williams became a Hall of Fame angler who
feasted on fish in Florida, Canada and many other places with
friends as varied as Stephen King, Bobby Knight and Curt Gowdy.

Williams also gave much of his time to the Jimmy Fund, a
Boston-based charity that fights cancer in children.

Politically, he befriended his old World War II buddy, George
Bush, and as recently as the winter of 2000 appeared at the
Manchester, N.H. baseball banquet with future president George W.
Bush.

Williams' fan base reached not only to the Boston laborer seated
in the bleachers, but also to non-New Englanders such as Kentucky
basketball coach Adolph Rupp and actor Robert Redford.

Williams made a sometimes overlooked diamond contribution during
his 1966 Hall of Fame acceptance speech when he urged inclusion
of Negro League stars in Cooperstown. Five years later, Satchel
Paige broke another version of the "color barrier" by receiving
baseball's ultimate honor and opening the door for other black
players.