It's not a myth, it's real and here's the proof.

The challenge for young players is to learn where it is and why
it matters - mostly in how the ball feels when hit. Why? Because
if the contact is less painful, then a hitter will develop
confidence, a willingness to hit the ball even on cold days! So,
while this study is based on physics research, and began with a
tennis racquet, it has some very practical applications in the
batter's box during a game.


Batters know from experience that there is a sweet spot on the
baseball bat, about 17 cm (6-1/2") from the end of the barrel,
where the shock of the impact, felt by the hands, is reduced to
such an extent that the batter is almost unaware of the
collision. At other impact points, the impact is usually felt as
a painful sting or jarring of the hands and forearm, particularly
if the impact occurs at a point well removed from the sweet spot.


The sweet spot of a bat exists partly because bat vibrations are
not excited significantly at that spot and partly because the
spot is close to the centre of percussion.

Actually, a baseball bat, like a cricket bat or tennis racquet,
has two sweet spots. If a ball impacts at either of these spots,
the force transmitted to the hand is sufficiently small that the
player is almost unaware that the impact has occured. If the ball
impacts at a point well away from the sweet spots, the impact can
be quite painful. One of the sweet spots is the vibration node;
the other sweet spot is called the centre of percussion (COP). 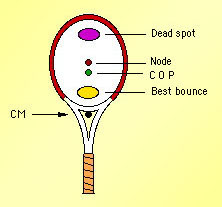 These and some other significant spots on a tennis racquet are
shown here. Contrary to popular opinion, the two sweet spots do
not coincide with the point at which the ball rebounds with
maximum speed, nor do they define the spots where the force on
the hand is zero. Forces on the hand arise from three independent
motions of the handle, namely rotation, translation and
vibration.

The vibrational component is absent when a ball strikes the
vibration node. The rotational component, arising from recoil of
the racquet head, exerts a torque on the hand, causing it rotate
about an axis through the wrist. As a result, a force is always
exerted on the upper part of the hand, and a force in the
opposite direction is always exerted on the lower part of the
hand. The two forces are equal and opposite for an impact at the
COP, with the result that there is then no net force on the hand
or forearm. This means that there is no sudden jarring of the arm
for an impact at the COP. 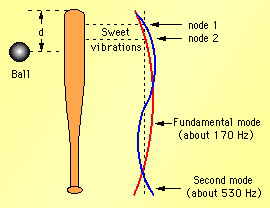 A bat is similar to a racquet but there are some obvious
differences. For a tennis racquet, only the fundamental mode of
vibration is excited by the impact since the impact duration,
about 5 msec, is too long to excite higher frequency modes of the
racquet. The impact on a baseball bat is shorter (since the bat
and ball are harder or stiffer), about 1.5 msec.