The Proper Position to Hit a Baseball With Authority


Here's a picture of Mark McGuire hitting one of his famous
and massive home runs.


Take note of the bent bat!

That's got something to say for the extreme physical power that McGuire
has from his body.

Also note: McGuire's head is on the ball and eyes focused on the target.


To hit a baseball with authority and power, you first have to get your body
into a position of power. The swing starts from the ground, Note McGuire's
right leg.

That's known as "squishing the bug"

The legs start the rotation with the hips following. Note the position of the
hips in reference to the baseball.


Now, here's the secret for hitting with power and authority......


Where is McGuire's weight?


Now draw an imaginary triangle from McGuire's back foot, to the top of his
helmet, and back down to his forward foot. It's almost a perfectly shaped
triangle.


Next note McGuire's front foot...it's stabilizing the whole rear effort, not
allowing him to slide out or lose his balance.


Now note his rear leg, the perfect balance and support his leg is
giving his upper body.


This folks is the proper position to hit a ball with authority and power.


It might be of interest to you, that every day in spring training Mark McGuire
took a minimum of 200 swings off a Tee to perfect his swing. Looks like he
got it right.


The old time baseball coaches would be throwing a fit though, cause
the trademark is behind the ball instead of on top of the bat...... 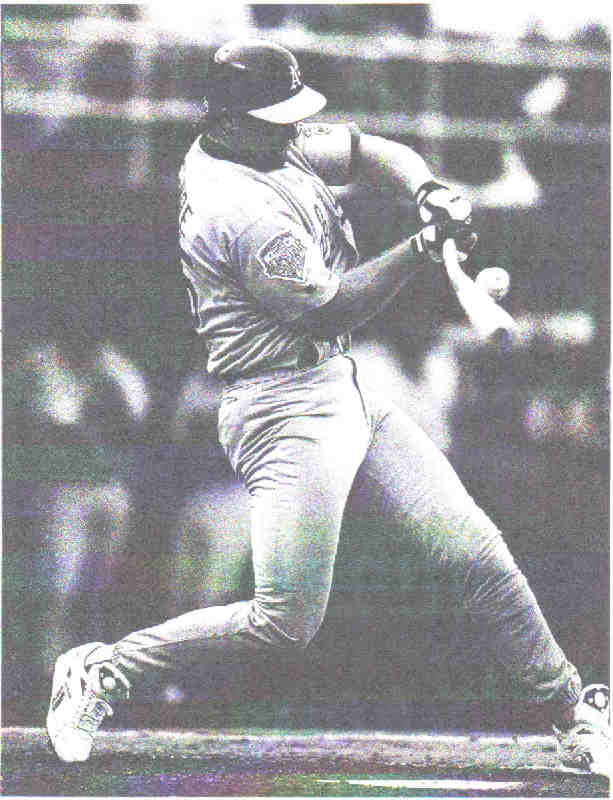 Now Compare the above picture of Mark McGuire and my son Karl as he is
hitting in a PIAA championship playoff game.


The result of Karl's efforts here was a weak pop up to third base.

Now let's look at the differences between Karl and McGuire.

1. Karl's back leg is collapsed a bit more than it should be, which may be
why he got under the ball.

2.  Karl's back foot is not squishing the bug as McGuire's is above.

3.  Karl's front foot is not as firmly planted as he should have it, see it rolled

a bit on the forward side.

4.  He does have the same nice triangle as McGuire's and his head is on
the ball allowing good shoulder to should swing with
the head staying      where it should

5.  The big difference is that Karl has a bit too much of his weight forward
compared to McGuire's. His weight is not as far back as McGuire's
but still back from a vertical plane which is much better than being forward


Karl has a real good complete swing. His bat has not stopped too early as
you can see he is completing his swing. Too many players begin to slow the bat down too soon and don't have a good follow through.


From the catcher's position, it would appear the ball was about in the
middle or a bit lower in the strike zone, which shouldn't have resulted in
a pop up....keep that back leg in the nice angle you see in the other pictures
here! Squish the bug.....that's the first step to keeping that back leg up.


Note that the next time at bat, Karl hit a drive for a triple that went off
the fence in left center about 420 feet. He is hitting with some power, but
can do some improvements to catch up to McGuire. Although I wish I had a
picture of McGuire popping up, that would make an interesting comparison.


Although in Karl's case you can't see it, the other players have one palm up
and one palm down on the bat upon contact. 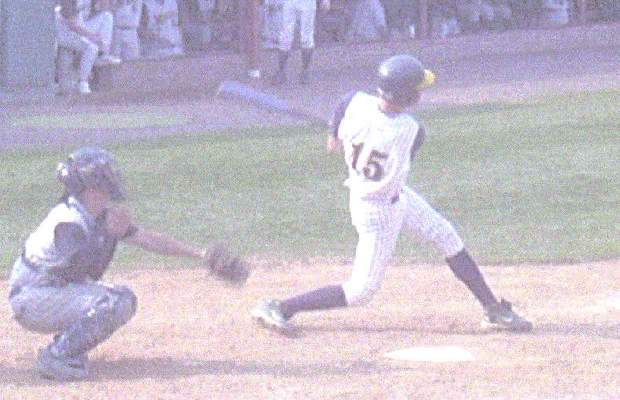 Now Compare the below two pictures:


This Red Sox player has a nice triangle, his back leg is not collapsed,
note also the bent bat......and the weight is about the same as Karl's
above, but not as far back as McGuire.

He has a real firm front foot bracing all his rear force. Head and
eyes are on the ball perfectly. Just a guess, but it looks from the angle
like this ball will be in the air, he got under it a bit.


Take a close comparison between this players arm positions and McGuire's.

This Reds player has his weight a bit too far out in front.

Note  the rear leg angle is almost the same in McGuire, the Red Sox player
and this one. It's important to hold your body up and not let it collapse.

Head and eyes are the same as above.

If you draw a straight line up on this player, you will see he is way far
forward than McGuire and about the same as Karl. The triangle is
unbalanced to the forward. 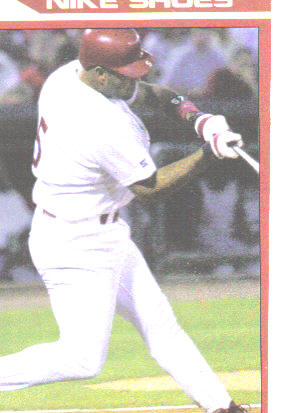 He's squishing the bug, real nice firm front foot, his triangle is a bit
more tightened that some of the others. Draw the straight line up his belt
buckle on this one.


Williams didn't have near the body strength that the other Major League
players above have, but still he ended up pretty high on the all time home run


Williams was a fanatic about getting a good pitch to hit, and he had
the right form and follow through to hit that pitch with authority and
power. McGuire had the physical strength to hit pitches off his power
zone into the upper deck, Williams had to be more selective because of
the lack of his size. If you notice he's swinging at a pitch that is right
in his power alley. McGuire's pitch was a bit higher in the zone.

Williams was also a keen student of the game, he kept a book on pitchers and knew better than anyone what pitch he was going to
get on each count.


Note the Red Sox, Reds Players and Williams all hit a pitch at about
the same place in the zone.....notice their shoulder angles to the pitch.

Also notice on all the pictures how the hips are almost parallel to the plate,
Williams more than any of them. Ted Williams has been proclaimed by
many to be the best hitter of all time, if not, he's certainly one of the
top 5. 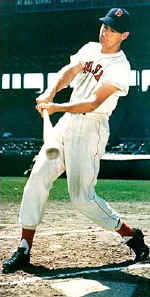 Here's Joe DiMaggio, one of the best hitters ever.

The only thing wrong is he is hitting off his heel on the front foot,
much unlike the other pictures above. DiMaggio had one of the most
graceful swings of all time. Poetry in motion.

You can compare Joe with the other pictures above. 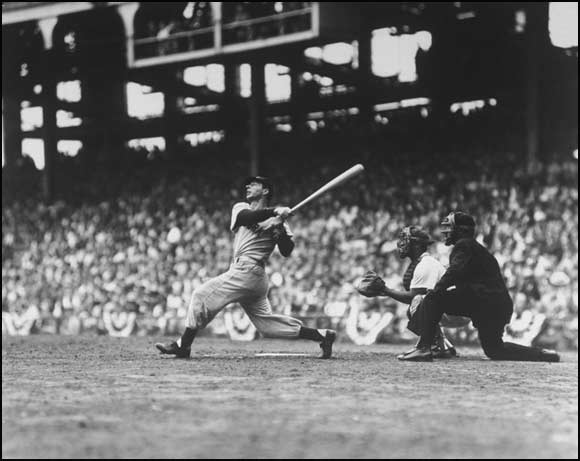