GLENSHAW - Carmichaels advanced to the PIAA Class A baseball
semifinals for the first time after scoring two runs in the top
of the sixth inning in a 3-2 come-from-behind victory over
Clarion-Limestone.

The match-up was originally scheduled for Thursday at Pullman
Field in Butler, but two straight days of rain led to the game
being moved to Shaler High School's Matulevic Field Saturday
afternoon.


"This is the farthest we will advance since the third
classification was added, and probably the best we've done since
1980," Carmichaels head coach Dave Bates said. "We didn't
capitalize on enough chances, but we were able to keep our
composure and pull out the win late in the game."

The Mikes left runners in scoring position in the first six
innings, but were not able to capitalize. They stranded 10
runners overall, but played error-free defense that helped keep
the Lions at bay.

"Defense wins championships in this game too," Bates said. "We
did not show enough fundamentals on offense and passed up some
good chances, but Jared (Lapkowicz) pitched a great game today
and we played solid in the field."

Lapkowicz struck out 14 batters and showed excellent control,
mixing up his fastballs with the off-speed pitches. He only
walked one batter, which was in the top of the sixth. Questions
about him getting tired were promptly answered, however, when he
struck out the next five batters, including striking out the
sides in the bottom of the seventh to end the game.

"We were watching him late in the game and he may have started
getting a little tired, but he kept plugging away," Bates said.
"He did a good job today mixing up his pitches and showed great
control."

The two straight rainouts allowed Lapkowicz some extra rest,
which he credited as working to his benefit and contributing to
him having enough to pitch the complete game.

"I definitely think the extra rest allowed me to be strong
today," Lapkowicz said. "My off-speed pitches were working well
and I was able to set up the batters by mixing it up with my
fastballs."

Clarion-Limestone head coach Brad Frazier thought Lapkowicz was
the main reason the Lions could not get on track.

"I thought he pitched a good game and really kept our hitters off
balance today," Frazier said. "We just didn't hit well today and
you can't win against a good team if you can't score runs."

After three scoreless innings, Carmichaels struck first when
catcher Jeff Lapkowicz ripped a 3-0 pitch 360 feet for a home run
over the left-center field wall in the top of the fourth to give
the Mikes a 1-0 lead.

The Lions took a 2-1 lead in the bottom of the fifth after two
outs and two strikes, as the bottom of their lineup came through.
After designated hitter Jesse Zahoran, batting eighth, singled,
right fielder Travis Rhoads also singled, and Scott Davis doubled
in both runners.

Carmichaels re-took the lead in the sixth inning with a two-out
rally off of Clarion-Limestone's best pitcher, Hayden Johnston,
who relieved starting pitcher Neil Reynolds in the fifth.

Designated hitter Niko Buday, batting in the ninth spot, hit a
slow-roller up the first base line and beat out the throw from
Johnston for an infield single. Second baseman Jamie Kowalczyk
then drew a walk. In a strange turn of events, the next batter,
third baseman Jamie Bandish, thought he drew a walk and was about
four steps up the first base line when the umpire called a
strike, leading to a full count. On the next pitch, he singled in
Buday to tie the game.

"When the count went full, I knew I had to protect the plate,"
Bandish said. "I just swung at the pitch and I was real excited
when the ball got through."

Kowalczyk scored the winning run after a passed ball by catcher
David Ferguson.

Carmichaels will now face Neshannock on Monday at 5 p.m. at
Falconi Field in Washington in the Western Division final. The
Lancers defeated Sto-Rox 4-1 in the first game of Saturday's
doubleheader.

The game is a rematch of the WPIAL championship game in which
Neshannock defeated the Mikes 15-0 in four innings two weeks ago.

"Both teams know each other well and we're looking forward to the
game," Neshannock head coach Mike Kirkwood said. "Anytime you
advance this far in the playoffs anything can happen."

"Neshannock is a good team and is very well-coached, but I don't
know if they are 15 runs better than us," Bates said. "Two
different pitchers will be facing each other and this will be a
whole new ballgame."


SLIPPERY ROCK - For nine days, the loss to Neshannock in the
WPIAL finals hung over Carmichaels High School's baseball team
like a storm cloud.

In the most important game of the season to that point, the Mikes
had one of their worst outings, losing 15-0 to Neshannock in a
game halted after four innings because of the WPIAL's Mercy Rule.

It's not the way you want to go into the first round of the PIAA
Class A playoffs.

So the jitters were never far from Carmichaels coach Dave Bates
early on against Saegertown, the District 10 champion.

But he didn't have to worry too much because the Mikes reverted
back to winning form, using a small-ball attack, strong defense
and the dependable pitching of Jared Lapkowicz to wrap up a 7-4
victory over Saegertown Monday at Slippery Rock University's Jack
Critchfield Park.

The win pushed the Mikes, now 16-3, into Thursday's quarterfinals
against District 9 champion Clarion-Limestone, a 4-2 winner over
Mt. Union in the first round.

"Usually, I don't like a week off after a loss," Bates said. "But
we had to do a gut-check. When we looked (at the bracket), we
determined we were in a better position (for the state playoffs)
than if we had won the WPIAL."

The Mikes bunted seven times, stole three bases, and launched
three triples in building a 5-0 lead after three innings and 7-0
edge heading into the bottom of the seventh.

Saegertown must have known this was going to be a long day when
Carmichaels' leadoff hitter Jamie Kowalczyk launched a drive into
the gap in right centerfield. Jason Mulligan caught up to the
ball and appeared ready to make the catch. But the ball went past
his glove and glanced off his face, allowing Kowalczyk to reach
third on what was generously ruled a triple. Kowalczyk scored on
a groundout by Jared Lapkowicz to make it 1-0.

Carmichaels broke the game open in the second inning, scoring
three times on one hit and two errors by Saegertown. A bad throw
by Panthers' starter Rory Mahoney on a bunt by Kowalczyk sailed
into right field and allowed two runs in. Another throwing error,
this one by second baseman Derek Wilcox, let Kowalczyk score for
a 4-0 lead.

"Normally, we field the ball well," said Saegertown coach Dave
Mosbacker. "But we got down and back on our heels and it deflated
us a little."

Mahoney didn't make it out of the second inning, giving up four
runs, only one of which was earned.

"The week off hurt him," Mosbacker said. "His pitch is a curve.
The more tired you are, the more the curve will break."

Carmichaels added three more runs over the final five innings.
Karl Cole's triple knocked in Andy Mazur in the third. Donnie
Hewitt tripled and scored on a squeeze bunt by Niko Buday in the
sixth and Cole scored on a bloop single by Buday in the seventh
that fell between three Panthers just behind the first base bag.

"Bunting opens a lot of doors for you," Bates said. "You're not
going to win WPIAL titles and PIAA titles without playing good
defense and doing the little things."

Lapkowicz pitched five strong innings, striking out six and
walking two. Cole came on in the sixth for a 1-2-3 inning but ran
into trouble in the seventh. He loaded the bases with one out
before Kyle Wilson hit a grand slam down the left field line to
make it 7-4.

But Mazur got the final two outs, much to the relief of Bates. 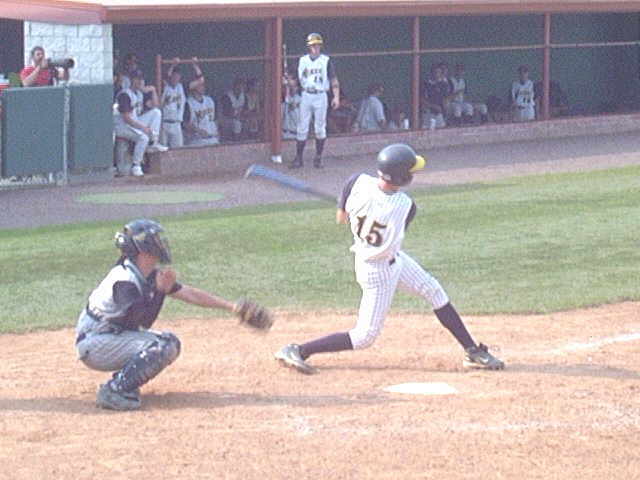